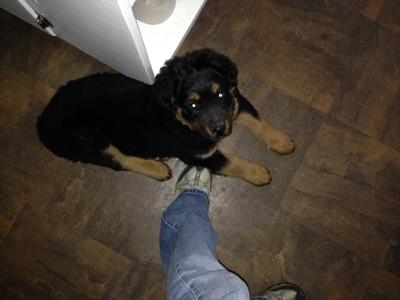 Zander at my feet, before he got sick

Zander at my feet, showing off his fluffy hairdo

I have an 8 week old Rottweiler puppy that I picked up from the breeder on Saturday, and his name is Zander.

When we drove away from his home and his parents, he howled and I almost turned around at that point. We had a long drive back to my house, but we bonded quickly.

When I unloaded him and took him into my house, he immediately took charge of exploring my house. He has a very confident, mellow personality. He spent Saturday afternoon bouncing around, following me EVERYWHERE, and having pack walks with my other two dogs (two adult labrador retrievers) in the back yard. He was as happy as he could be. And so was I. He has the perfect personality and is just the cutest little pup I have ever seen.

He and I are the perfect match for each other personality-wise. I already love him after only one day of having the pleasure of his precious company.

He refused to eat Saturday and I woke up to the sound of him vomiting at 2:30 a.m. on Sunday morning. I cleaned him up, assumed it was just stress, and put him back to bed. He slept the remainder of the night and was still asleep when I woke up in the morning. I found this a little bit unusual for a pup. He refused to eat Sunday morning, and only took a few laps of water. He vomited up the water and became more and more lethargic.

I called two emergency vets, and both said to keep a close eye on him and call back later in the day or if he got significantly worse. I gave Zander some pepto bismol and he became progressively more lethargic and depressed. When he got to the point that he would no longer stand up and I had to carry him with me everywhere I went, I told the emergency vet he needed to be seen ASAP. She agreed and met me at her office 20 minutes later (about 1:30 p.m. Sunday).

The vet tested Zander for Parvovirus, and he tested positive. He was immediately quarantined, put on an IV, and given IV antibiotics and liquids. He was doing great until last night (Monday night), when the virus really took hold. He is now vomiting blood and having bloody diarrhea. The vet said he looks pretty weak. She has added anti-nausea medications to his cocktail. I have not been allowed to see him since Sunday due to the highly contagious nature of the virus, which makes me really sad. I worry Zander will think I abandoned him right after taking him away from his mother and father.

I am still very optimistic, as he is a large pup (20 pounds at 8 weeks old), he received early treatment (IV fluids and antibiotics before he even had bloody diarrhea and vomit), and he did in fact have two vaccinations already. The vet said if his mother had a strong maternal immunity to parvo, this immunity likely passed to him and his immune system could have worked against him, allowing him to sort of fight off his initial two vaccinations. None of his siblings have gotten sick, to my knowledge.

I am writing to ask for prayers for Zander. He has been so strong so far, and I believe he will make it. He may just need a little bit of help. Once he makes it through this, he will be back to his normal self and following me around the house, bouncing around, and hopping through the grass in the back yard. He is an amazing dog already. His big brown eyes tell you all you need to know about his personality. He is gentle, self-assured, confident, and just the sweetest little puppy.

The more prayers he has, the better. Please help us!

Desiree, I’m SO sorry for what has happened to Zander. Parvo is a terrible disease and having had personal experience of it’s effects I know just how heart-breaking they can be. I also know that some pups survive and go on to grow into happy, healthy adults.

I am most definitely praying for Zander’s recovery.