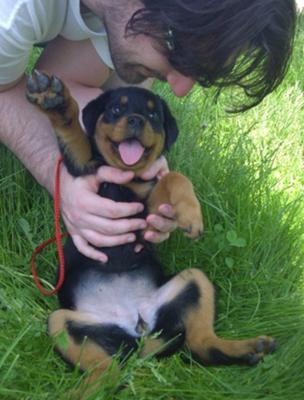 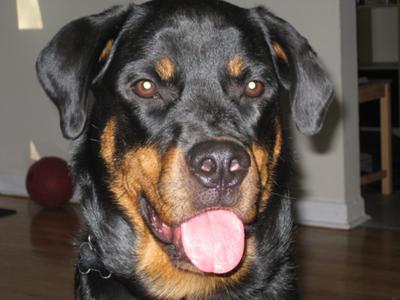 My husband is a dog person; he grew up with dogs and could not wait to get a dog once we had settled down. I, on the other hand, had never owned a dog or really been around dogs, so when he told me that he wanted a Rottweiler I was a little hesitant.

I started to research Rottweilers and quickly realized that they were nothing like I had been led to believe and I found myself becoming more attracted to the breed the more I read about them. I inevitably gave in and we started looking for a local Rottweiler breeder in April of 2011.

We were looking for a cheaper puppy, as we had the misconception that expensive, registered puppies were for show, and we just wanted a nice family dog, so we didn???t think twice about whether the parents were registered or not. We found a breeder about an hour from where we lived who had a litter of Rottweiler puppies born on March 30th, so we went up to visit them.

The breeders consisted of a couple who had no children, but instead had three adult Rottweilers (two females and a male). We were able to meet the male dog, who was incredibly large and friendly (my first encounter with a Rottweiler) and he was also registered, however he had not yet had his hips checked (that was booked for the summer), while the females were unregistered. The breeders were very friendly and willing to answer any of our questions. They insisted that they had never had any health issues with any of the dogs they had bred, and that they treated and cared for the puppies as if they were their own children.

Their place looked quite nice (tidy, lots of land/room for the dogs) and they seemed very sincere so we put a deposit on a female puppy. On May 18th we drove up to the breeders and picked up our little baby girl, whom we named Kodiak (Kodi for short).

Kodi was a great puppy and a very quick learner. We moved to a different city midway through the summer and she had no issues with adapting. During the summer we took her for walks and went rollerblading with her; she seemed to have boundless energy. In October 2011 we stopped by one of the parks along our walking route and there was another woman there with her dogs playing fetch. Kodi got to join in the fun, and ran around for close to an hour. That night, Kodi made some whimpering noises whenever she got up from a lying position. We figured she was sore from all of the running and we just let her rest.

Over the next few weeks she continued to whimper at night whenever she had a lot of exercise during the day; a long walk or puppy class. Eventually it got to the point where she would whimper whenever she would get up from lying down, regardless of exercise or time of day, and she even started to drag her left hind leg in her puppy class. Our puppy trainer began to get concerned for her and recommended we take her to the vet. She recommended her vet, as we were still fairly new to the city and had not had much luck with the first vet we had gone to.

We went to see this new vet (who is absolutely amazing) and he was immediately concerned with just the look of her hind end; she has a very narrow stance in the back and her legs seem to come down to a point. He took some x-rays of Kodi and they confirmed that she had hip-dysplasia at 8 months of age.

Our vet booked us an appointment with a local orthopedic surgeon to learn what our options were. The surgeon confirmed that she had severe hip-dysplasia with 10% coverage in her left hip and 30% in her right; however she was not a candidate for surgery. He talked to us about the various procedures that are performed on dogs with hip-dysplasia, such as a triple pelvic osteotomy and hip replacements, and explained that Kodi???s hips were too degraded for a TPO and she was too young (not fully grown) for a hip replacement. He suggested that we give her some medication for the pain, increase her glucosamine supplements, and just let her grow. He explained that with any luck, she will develop more with age and the additional tissue and muscles will help keep her hips together.

Over the next few months we switched her to a special joint dog food for extra supplements and she seemed to be greatly improving. She rarely cried and she was even sitting with her hind legs properly under her, whereas before she would immediately move her legs out to the side while sitting. Once the weather warmed up we were even able to take her on walks again without her being in pain later and she loved it!

We had a warm spell here in March which allowed us to take Kodi out every day for a walk during which she would get to chase some birds or sticks in a quiet park just off our walking path. On the third day of stick chasing, she was running after a stick and midway to the stick she just started to cry and limp. We immediately ran to her and my husband ended up carrying her home; not an easy feat given that she is about 70lbs and does not like being carried. We gave her some medication and kept her under observation.

She wouldn???t put any weight on her left leg, even after a few days, so back to the vets we went. Our vet asked us what had happened and when we said that it seemed to occur mid stride, she didn???t seem to slip or fall, he went immediately for her knees, and sure enough she did not like that. He believed that she had ruptured her cruciate ligament and wanted to do another round of x-rays to make sure that nothing else was hurt. Her x-rays were frightening; her left hip socket was basically gone. It had eroded away and her right hip socket was not looking so great either. Our vet suggested we go to Toronto (a 2 hour drive) to meet with a different orthopedic surgeon (our local surgeon did not do hip replacements) as they might recommend we fix her hip and knee at the same time.

We met with the surgeon in Toronto who confirmed that she had ruptured her cruciate, but once again told us that she wasn???t a candidate for hip surgery. Firstly, they would not fix both at once even if she was a candidate as the longer she is under anesthetic the greater the risk of infection. Secondly she was still too young to really consider a hip replacement. The surgeon told us that she was probably not in as much pain now since there was less bone in her left hip joint to rub against and it was actually her right hip that seemed to be bothering her more as she had ruptured her left cruciate causing her to put more weight on her right leg. He suggested we once again wait and see, as there was still a chance that she may not need a hip replacement and that she???ll develop muscles around her hips. Furthermore, hip replacements in dogs are typically only good for 10 years so he suggested that if we could wait, we should. He said that if Kodi seemed to be having discomfort with her hips once her knee was fixed, and it didn???t seem to be getting better, then surgery would be back on the table.

The surgeon then went on to explain how they fix cruciate ruptures and gave us an estimate of the costs. Later that day we contacted our local vet, who also fixes cruciate ruptures, and after talking to him and giving it some thought we decided to book Kodi in with our local vet as we would only be 10 minutes away if something happened, rather than two hours. She is currently booked in for May 4th and we???re hoping that she will have a speedy recovery.

Since we first found out that Kodi has hip-dysplasia we have been trying to get in contact with her breeders to let them know about the disease, since it is genetic. We have tried to email and call them numerous times without any success. Unfortunately we are now 6 hours away from the breeders so we have not been able to visit them in person. Their outright refusal to return our messages and acknowledge the hip-dysplasia has been upsetting and frustrating.

We love Kodi so much, and she is the sweetest, biggest suck of a dog I have ever met, and I am very glad that we have been able to take care of her. I sincerely hope that, despite their lack of communication, the breeders have discontinued breeding the dogs as I hate to imagine more puppies in pain that may not be as fortunate as Kodi.

I cannot stress how important it is to really research the breeders you are planning to buy from. It is so easy to fall into a trap, especially when the breeders seem nice and the price is tempting. It breaks my heart every time Kodi cries or whimpers and I hate having to try and restrain her from running around or playing hard like a puppy should. She has been through so much in her first year of life and I am truly grateful for everyone who has supported us and helped us.

She is an awesome dog and a cherished member of our family and I just want her to be happy.

To anyone out there considering buying a puppy, please do your research and I would also recommend buying pet insurance, because if any health issues arise, it is not cheap.

I hope that Kodi???s story is helpful and educational. If anyone has any questions, please feel free to ask.

Hi Nikole. Thanks so much for taking the time to share Kodi’s story here!

There are SO MANY prospective puppy owners who don’t yet realize the importance of health checks for breeding dogs.

I hope she recovers well from her knee surgery and that her hips are eventually ‘fixed’ one way or another.

Please keep us posted as to her progress. She’s a lovely girl and obviously much loved. I’ll say a little prayer for her.

This page may also be useful.. Choosing A Rottweiler Breeder