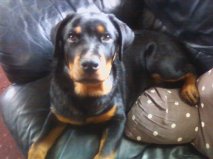 My boy is a runt of the litter he’s 5 months old weighs about 50 lbs.

We have kept him socialized with people,children and other animals.So far he is good with all.He loves going to flea markets and wants everyone to pet him. He loves children of all ages he wants to lick them to death.

Have been pleased with how smart he is house broke in 7 days time.

Jeanie, overall it sounds as though your Rottie is doing great, but do be consistent in correcting this growling behavior. It is not acceptable for a pup/dog to growl at anyone, unless they’re provoked or being threatened!

It could well be an ‘alpha’ thing here, because your pup is into the adolescent stage and he’s testing the limits and trying to figure out where he fits in, and just how high up the ladder he can go in terms of authority.

Firm verbal correction, and a pop on the collar to reinforce it if necessary, is important. Never allow your pup to control your behavior (or anyone else’s) with his – whether it’s growling, nipping, leaning or anything else. He needs to know he is NOT in charge here.

If your husband is not already equally involved in the caretaking of your pup, get him involved. He needs to be feeding, exercising and training your Rottweiler because dogs naturally respect those who control the resources of life (food, treats and praise are three ‘biggies’ to your pup). Hand feeding him would be a good idea too.

This teenage stage can be challenging, but they do grow out of it, just continue to be loving, patient and consistent with loving discipline and enforcing house rules. Good luck with your handsome boy 🙂