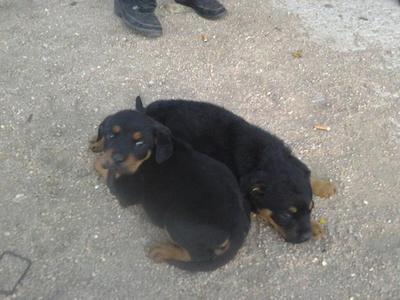 Kratos (right) and his sister Kali (left), as most know is the Sanskrit Goddess of both Creation and Destruction.

My fiance always wanted a rottweiler. When I was searching for a puppy for our family, I found a pit bull mix that I instantly fell in love with. I named him Conan since I have been an adoring fan of Conan the Barbarian since I was a kid. Since he wasn’t the rottweiler my fiance wanted, I promised him that we would still get him his baby.

Chance would have it that a friend of ours had accidentally had one last litter before retiring her breeding pair, so she was willing to cut us a great deal, since she would be able to see him grow up with us. When we picked him up, we knew he would be a big beast like Conan (probably bigger) so we thought “how can we get bigger than Conan?”.

My son has been playing God of War for months and had suggested we name him “Kratos”. After looking into it, we found that Kratos was not only a popular warrior from a best-selling game, but also the personification of strength and power in Greek Mythology. The son of Pallus and Styx, and essentially enforcers of Zeus – much like the Horsemen of the Apocalypse called as a last resort.

We already loved the name, even if it was based on the God of War character alone, but knowing the true historical strength of the name made it all the better.