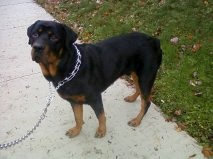 I’m wanting to get a second rottie my boy is 11 months old now house broke and is doing well.

Wanting to get another pup as a playmate what is a good age to add a new pup?

A BEST age (in my personal opinion) would be once the first dog is fully adult, and for Rottweilers this is somewhere between 2 and 3 years old.

The adolescent period can be pretty challenging by itself (that will last until around 18 months to 2 years, especially in males, so adding a new pup at this stage MIGHT cause some dominance issues, bad behavior and so on.

BUT, so much depends on an individual dog’s personality, training, behavior, dominance/submissive levels and so on that there’s no hard-and-fast rules about it. You know your Rottie best and are in the best position to judge how he might react to a new pup in the house.

There is one hard-and-fast ‘rule’ that I would recommend following though… and that’s to add a puppy of the opposite sex!

Dogs generally accept a puppy with few problems, but as that pup grows dominance issues can show up and they’re much more obvious and problematic with two dogs of the same sex. So it makes sense to sidestep that pitfall!

Obviously you will want to be sure your dogs are spayed/neutered to prevent pregnancy though.

Hope this helps. Good luck with it all. ~ Sue