Dog food aggression and other types of resource guarding (such as guarding toys, bones or treats) is actually more common than many people think, and I regularly get questions from new owners asking how to handle this problem. 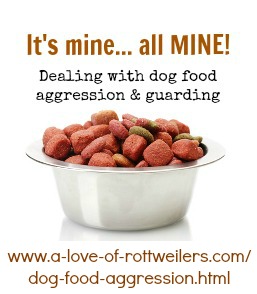 Food guarding in dogs is a normal canine behavior in response to a perceived threat to food (and therefore his life), and it tends to be instinctive, a sort of survival instinct that is linked to the pack mentality.

It’s especially common in pups and dogs who have had to fight for their share of food, so it’s probably no surprise that it may be seen more in puppies from large litters.

Or in pups or dogs who haven’t been well taken care of, or had enough to eat, in the past – such as rescued or abandonded dogs.

However, if you’re adopting from an animal rescue organization or shelter, chances are your pup/dog won’t display this type of behavior, or if he does you will be made aware of it before you adopt him.

If a dog comes into a rescue with this issue, they generally work with him to eradicate this behavior before rehoming him.

Dog food aggression is not seen any more in Rottweilers than in any other breed, but when you’re raising a large breed puppy who is going to become a big, strong adult, you need to be especially careful to make sure this doesn’t become a problem.

The older the dog and the dog food aggression has been going on, the longer it will take to correct it and the more slowly you will have to move.

However, given plenty of time, patience and practice most dogs can be cured of this habit.

The most ‘alpha’ member of the household should start this training, and once it’s been established then all members of the family should take part at one time or another (including children).

Bear in mind that a dog may not only guard his food bowl, but the space around it too.

If you have a pup or dog who growls or snaps when you approach his dish, when petted or touched during eating, or even one who’s body language indicates tension/fear/anxiety or aggression when someone gets close to his food bowl, then you need to take steps to correct that behavior right away.

Food guarding in dogs stems from the dog’s fear that he will lose his meal if you touch it. So, your aim here is to teach him that both you (and any other family member or human) and his food can be in the same place, at the same time, with positive results.

He needs to see you as the provider of his food, not as a rival for it! 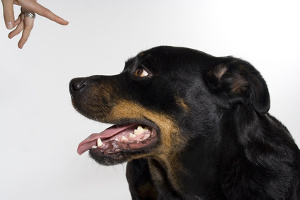 It’s not something he will not learn overnight, and depending on how old he is and how ingrained the guarding behavior.

It could take anywhere from a couple of weeks to several months to re-shape his behavior.

It’s important not to rush things!

Take it slowly, but steadily, and make sure that he is comfortable with each step in the process before moving onto the next one.

Here are the steps I’ve used with puppies or dogs who have a tendency towards dog food aggression…..

1.  Begin by hand-feeding your pup one meal per day. You can either feed him individual pieces of kibble from your fingers, or fill the palm of your hand and let him eat out of that. It’s a bit tedious, but is the first step in teaching your pup that your hands and his food CAN go together in a good way!

Depending on the pup, you can do this for a week, or two, or even longer if you need to. You need to be certain that he is perfectly happy eating from your hand before moving on.

2.  Let your pup see you putting food in his bowl with your hands, and then put the bowl down in front of him. If possible have him sit while you are doing this, but many puppies get soooo excited at mealtimes that they simply can’t stop wiggling and jumping.

In this situation, just ask him to ‘sit’ right before you place his bowl on the floor.

Once he’s eating, walk past him and drop some REALLY TASTY treats into his bowl. You can do this from a height/distance to begin with so he doesn’t fee threatened, but you don’t want to be throwing them at him or he’ll get scared/excited.

Choose something he absolutely loves, like chicken or liver or hot dogs etc. The smellier and tastier the better 🙂 It may make it easier to introduce an elevated food bowl when you start this part of the training – it’s easier to drop treats into accurately.

Over the next couple of weeks, continue to drop treats into his bowl every mealtime, gradually getting closer to him and his bowl as you do so.

Once he realizes you are giving him food rather than taking it away he will feel much less defensive.

You need to be able to place the treats in his bowl, right under his nose, before you move onto the next step. Take your time and don’t rush it.
3.  Now, instead of dropping treats into his bowl, begin to pick it up and place the treats inside. You want him to SEE you do this, so at first you can just lift the bowl a few inches off the ground.

However, your aim is to eventually be able to pick up the bowl, stand up straight, drop the treats in and give it back to him without him getting upset. Again, take your time and move slowly so that he gradually gets more comfortable.

Don’t ever be tempted to be harsh with your pup/dog when you’re training him (in any training situation), as it causes way more problems than it solves. Rotties are very intelligent and eager to please, but they can be stubborn if they feel they’re being threatened or ‘bullied’.

Especially in an emotionally-charged situation such as that created by dog food aggression, you want to de-escalate and tone down the atmosphere, so always use a low, calm voice and be patient and consistent in your methods.

Once you’ve reached this point you’ll have achieved a big victory, so give yourself (and your dog) a pat on the back.

Dogs are creatures of habit and although you will no longer need to put treats into his bowl at every mealtime, you will need to do it several times a week so that he doesn’t forget!

How To Prevent Dog Food Aggression

There are a few general guidelines to follow when it comes to feeding your dog that can help prevent dog food aggression from getting started in the first place.

Also, although you want your pup to be able to eat in relative peace, without feeling stressed by other dogs/pets/people etc., you don’t want him to only feel comfortable eating in a quiet, silent atmosphere.

Make sure that he eats within earshot of the general noises and activity a family makes.

Let him get used to people passing by him and so on, just don’t hassle him or get too close on purpose. You don’t want to create a problem!

It’s always easier to prevent something, or to correct it early on, than it is to try to reshape behavior that is already entrenched.

Even if your pup has never shown any signs of dog food aggression it’s a good idea to follow these guidelines on a regular basis.

When puppies become adolescents (the equivalent of human teens), they can try to challenge the ‘house rules’, test limits and attempt to assert their authority as part of their normal development.

This can manifest itself in lots of ways, and dog food aggression or resource guarding are just a couple of them, so it’s good to be prepared.

Puppies (and sometimes even adolescent/adult dogs) can see children as their siblings or equals.

This can mean they feel entitled to protect their food/bones/toys from them, just the way they would with other puppies. 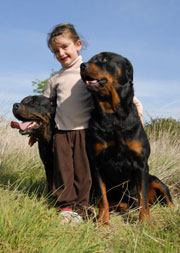 That can lead to someone getting hurt, and especially with big, strong dogs such as Rottweilers it’s important to make sure that they understand their place in the family from day one.

If you have a new pup and he’s never shown any signs of dog food aggression then involve your kids in feeding him from the beginning.

Dogs respect those who control the resources of life – and in their eyes, food is the number one resource!

But, if you have a puppy or dog who gets tense or anxious when someone gets too close to his dish, make sure the pack leader (usually whoever the dog has bonded too most closely) follows the steps outlined in the

If you have a pup or dog who is extremely agitated or aggressive around his food bowl, and you are unable to improve his disposition with the techniques above, then you need to get some professional help to deal with it. 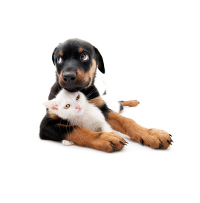 A qualified and experienced dog trainer, or a dog behavioral specialist will be able to help you, and your vet should be able to point you in the direction of these types of professionals.

Don’t ignore the problems of dog food aggression or resource guarding and hope they will go away, because it won’t, they will only get worse.

Apart from the fact that someone is very likely to get bitten if this situation is left untreated, as your pup learns that he can control your behavior with his, he will gradually begin to try to to exert his influence in other areas too.

Before you know it you’ll have a dominant dog who feels comfortable using growling or snapping to get his way. That’s NOT what you want.

Dogs who are food-aggressive by nature, may also get very excited and ‘bossy’ around treats, so be careful when training. Make sure they learn to ‘take it nicely’ rather than snatching their reward from your hand.

ANY puppy, or older untrained dog, should attend at least a puppy or beginner obedience class where you’ll be able to learn to communicate better with each other, and get some hands-on help in problem areas.

If your pup or dog doesn’t show dog food aggression, but does like to protect or guard his toys/bones etc., I’d recommend checking out my Free Puppy Training Tips page – specifically the section on the ‘Leave It’ command.

If you can teach him this, then you will be able to remove anything from him without incident.

But again, you’ll need to be patient and consistent as you work with him and don’t be tempted to move too quickly.